Tomorrow, Thursday, the curtain comes down on the first edition of the Egyptian Professional Clubs League Cup, when Cairo Stadium hosts the confrontation between Ghazl El-Mahalla and Future, with a Spanish whistle for referee Jesus Manzano. 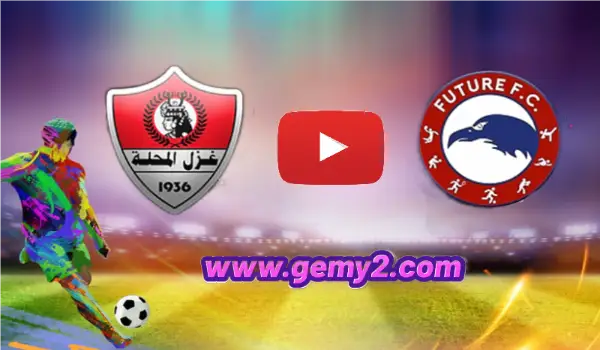 The tournament started on January 12 last between the Egyptian League clubs and saw the qualification of Future, Ismaili and Ghazl El-Mahalla clubs at the top of the three groups, and Enppi as the best runner-up.

The journey of the two teams

Future qualified for the final, after leading the first group with 12 points, by defeating the Eastern Company 3-0 and Pyramids 2-1, with the same result over Al-Masry, defeating Misr El-Maqasa 1-0, and then losing to Al-Ittihad 1-2.

Future overcame Enppi's obstacle in the semi-finals 2-0 to reserve his place in the final.

Ghazl El-Mahalla tied with Ismaily in the semi-finals 2-2 and the farmer's leader won 4-3 on penalties.

Future met against Ghazl El-Mahalla once this season, and they came out in a 0-0 draw in the 12th round of the league.

Future is betting on the capabilities of his stars and the experiences of his players in order to seize the first title in his career, after he appeared in the Egyptian League this season for the first time after his management's acquisition of Coca-Cola Club.

Future is led by Ali Maher, one of the best coaches in the Egyptian League during the last 3 seasons, and he has previously led Al-Masry to qualify for the African Confederation, as well as led Future to ascend to the Confederation for the first time in its history.

Future relies on the experiences of some of its players, led by Saad Samir, goalkeeper Mahmoud Abdel Rahim "Jansh", Marwan Mohsen, Karim Walid "Nedved" and Mohamed Farouk, in addition to the brilliance of Ahmed Atef, Mohamed Reda "Bobo", Omar Kamal and Mahmoud Merhi.

Future is also armed with the capabilities of Tunisian duo Marouane Sahraoui and Ayman Sfaxi to win the first championship in the team's career.

Mohamed Abdel-Karim, the general coach of the Future team, told Kouora that his club will fight to achieve the League Cup title and win the coronation from the fangs of a fighting and distinguished team with the value of Ghazl El-Mahalla.

He pointed out that the final matches are always outside the accounts, explaining that Ghazl El-Mahalla is a strong competitor and the meeting will be exciting between the two teams.

Ghazal El-Mahalla has a great ambition to regain his glory and bring the championships back to the treasury of the leader of the peasants.

However, Ghazl El-Mahalla is not lucky in the final matches, as evidenced by losing the Egypt Cup title 6 times in the final match, becoming the second most team not to win the championship title despite qualifying for the final after Al-Sikka.

Ghazl Al-Mahalla is counting on the ambition of its coach, Mustafa Abdo, the former player in the leader of the farmers, in addition to the capabilities of the promising generation that brought the team back from the second division league led by striker Abdo Yahya, defender Muhammad Fathallah, Yahya Hamid, Hisham Adel and Ahmed Al-Nadry, along with the brilliance of Tanzanian Hamid Mao.

El Mahalla coach, Mustafa Abdo, said that his team qualified for the final well-deservedly after hard work and a long journey in the tournament.

He stressed that he will do his best with his players to achieve the championship title and make the Mahalla fans happy with this championship for the first time in the club's history.