Al-Ahly occupies third place in the first group with the same number of points as today’s competitor, who could not beat him at home and drew with him. Four points too, and it was Al-Ahly's last match in the league against the Ismaili team, and it won with two goals to nothing. 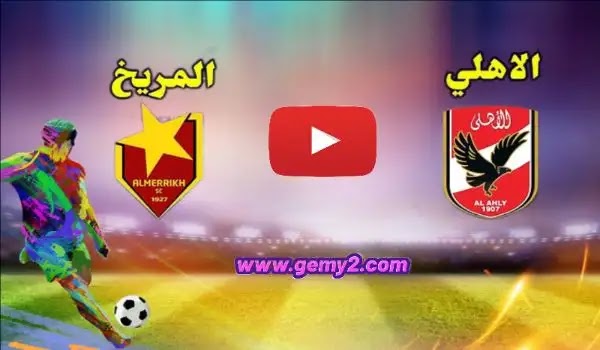 Al-Ahly of Egypt, after three rounds of the group stage competitions, achieved only one victory, which came at the beginning of his career at the expense of the Sudanese Mars, with three goals without a response. Mohamed Magdy Qafsha from a distinguished header and Mahmoud Kahraba, who is absent from the team for more than a month due to the lack of His commitment, in addition to Zambian Walter Bwalya, who scored his first and only goal with the Red Giant so far.

There will be no favorable opportunity for Al-Ahly except to win and get the three points from a difficult stadium and a stubborn team with high spirits, especially after the point it got from the red genie at Cairo Stadium a few days ago, and today the conflict will be fierce in the Martyrs Stadium.

Al-Ahly overcame its counterpart Sunedip, the champion of Niger, in the second round of the African Champions League after beating him in the first leg with a goal, then outperforming him in the forth leg with a clean four, and then qualified for the group stage. The Tanzanian with a goal without a response, and in the third meeting, he surprisingly tied against Vita Club, the Congolese, with two goals to the same, and he was late in the result until the star Mohammed Sharif equalized for him, and he advanced to the Red Genie, Marwan Mohsen, before the referee, Radwan Gaid, calculated a questionable kick to equalize the Congolese team.

While Vita Club, with a bad start with a loss at home and among its fans against Simba of Tanzania, with a goal without a response, he bared his teeth after crushing the Sudanese Mars with a score of four goals against a goal in Sudan Stadium, which increased his hopes of harming the competitors, and the Congolese team was stubborn in front of The Red Genie Al-Ahly at the Cairo International Stadium to come out with a valuable point that put the devils in a big predicament, and they will enter with high spirits, while Magdy's colleagues play the match with one desire, which is to win.