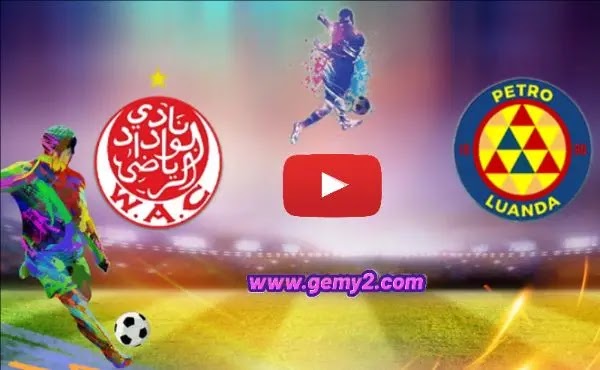 Wydad club met with its counterpart Petro Atlético on 4 previous occasions in the African Champions League, Wydad won 3 of them, drew in one match and did not lose in any match.

Wydad striker Je Mbenza confirmed in his statements before the match that his team will try to return from Diyar Petro Atlético with winning points in a match that he sees as very strong because it is in front of a strong competitor and he also wants to surprise, and continue the brilliance series after seizing a valuable tie from Zamalek Square in the first round of African Champions League group stage competitions.

The date of the match between Petro Atletico and Wydad Wydad

Wydad fans are waiting for a strong match for their team against Petro Atletico today in the second round of the Champions Groups at 3:00 pm Cairo time, 4:00 pm Mecca time, 5:00 pm Abu Dhabi time.

The first leg of Wydad witnessed a clear superiority on the part of Wydad against its Angolan counterpart Sagrada, where the Moroccan team scored a great victory with three clean goals, signed by Ashraf Dari, Yahya Gibran, "the penalty mark" and J. Mbenzaz.

As for the Angolan team, Petro Atlético, they returned from Cairo with a very valuable draw from the fangs of Zamalek, after the draw with two goals for them. The double of the Angolan team was scored by Gilson and Vidinho, and the goals of Zamalek were signed by Youssef Obama and Hamdi Al-Wensh.