A summit awaited by millions El Masry Club VS TP Mazembe in the African Championship Watching the Al-Masry and Mazembe match broadcast live today in the second round of the group stage of the African Confederation Cup at the Army Stadium in Suez at 18:00 pm Cairo time. 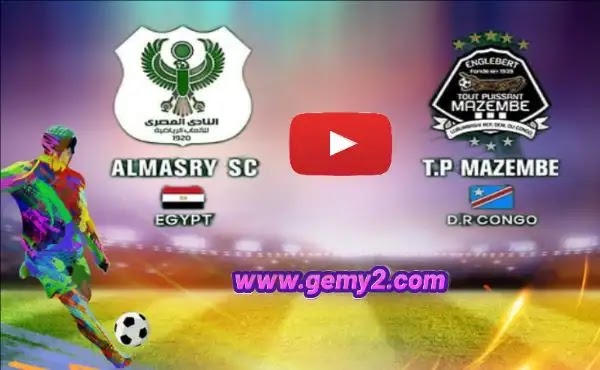 French coach Frank Dumas, coach of TP Mazembe, played on the strings of history when he talked about facing Al-Masry Al-Portsaidi, and confirmed that his team is determined to defend the long and wide history of his team, and also indicated that the meeting will be difficult for the two teams, not just one team.

The task of searching for victory is to hold on to the hope of moving to the next round of the Confederation Cup, where the motivation appears more for the Egyptian who wants to win a continental championship, and you can follow tonight’s match between the two teams via beIN Sports HD 3.

A strong and fateful match may be for Al-Masry today against TP Mazembe, because you will face one of the most important clubs in recent years in Africa, and if his level has declined a lot, but the experience remains likely to support him and his players in African forums, which was confirmed by Moin Al-Shaabani, coach of the players before the match and called them to take heed Clearly, especially in defense and taking the ball out from behind, because the Congolese team has a fierce attack and will try to show its fangs and claws in that confrontation.

The expected formation of Al-Masry Al-Portsaidi against TP Mazembe:

Al-Masry Al-Portsaidi began his difficult journey in the Confederation Cup with two confrontations with the Ugandan authority in the round of 32, “the first” and excelled in the total of both home and away matches with a score of 1-0. In his favour, after he scored a goal outside the ground in the defeat he suffered with two goals, and Mohamed Abdel Latif Grindo scored a goal in the second leg, which led the sons of Port Said to excel. The sons of coach Moeen Al-Shaabani.