Millions of followers of African football are awaiting a burning summit between the Renaissance of Berkane and his counterpart, Gendarmere National, the champion of Niger, to watch the match between the Renaissance of Berkane and the National Guard, broadcast live today at ten o’clock in the evening, Mecca time, on the Municipal Stadium of Berkane, in the opening of the group stage of the African Confederation. 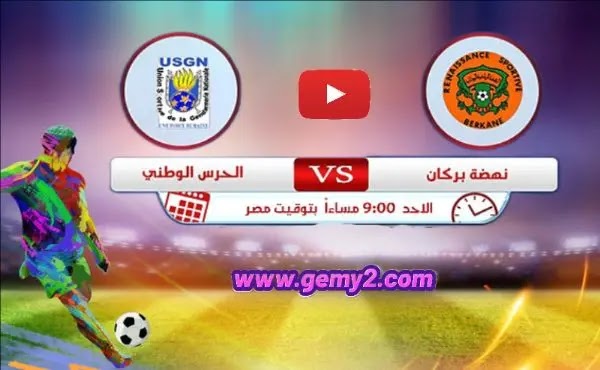 The National Guard team had qualified from the preliminary round of the Champions League after crossing Le Messagere Ngozi Burundi with a score of two goals against a goal in the total of the two legs, before being eliminated from the competition by the defending champion Al-Ahly with a score of seven goals against two goals in the second round, to move to play in the Confederation and excelled Motima Pembe, the Congolese champion, with two goals to one.

You will watch the match between Nahdet Berkane and the National Guard at the end of the first round of the group stage competitions in the African Confederation Cup, via beIN Sports HD 3 and the Moroccan sports channel on terrestrial frequency.

Youssef Al-Fahli presented his credentials after scoring the winning goal against Ittihad Ben Guerdane of Tunisia in the first leg of the “first” round of 32. The second “tied against the Rwandan army in the first leg without goals, before achieving an exciting victory in the second leg, signed by both Al-Arabi Al-Naji and Muhammad Aziz.

Nahdet Berkane's brigade plays with Group D in the African Confederation Cup alongside the Nigerien National Guard, Ivorian ASEC Mimosa and Tanzania's Simba, a group that is not easy for the men of Nahdet Berkane.

The Moroccan club Nahdet Berkane played one match in the local league at the beginning of 2022, and it came against Maghreb Fez on February 5 at the Municipal Stadium in Berkane and ended in a goalless draw.