Watching the match between Cameroon and Burkina Faso, broadcast live in the match that will be held at Ahmedou Ahidjo Stadium at exactly nine in the evening, Cairo time, in the meeting to determine the third and fourth places in the African Nations Cup. 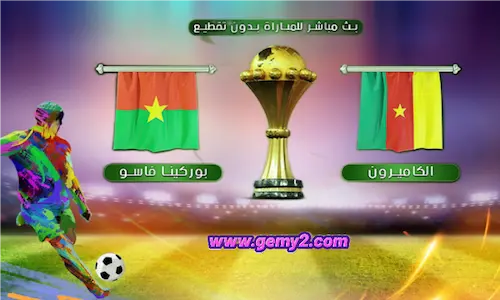 Burkina Faso and Cameroon will search for victory in today's match, winning the silver medal and taking third place as the best team in the continent after the two teams lost the opportunity to compete for the championship title. Burkina Faso from Senegal, with three goals to one, in a match marked by club and excitement.

Cameroon will look for victory in today's confrontation in order to compensate the fans after the defeat against Egypt and the loss of the title. And in the round of 16 he beat Comoros with two goals to one, and in the quarter-finals he beat Gambia with two goals without a response, and in the semi-finals he lost to Egypt on penalties.

While Burkina Faso lost the first meeting against Cameroon with two goals to one, then beat Cape Verde 1-0 and then tied with Ethiopia with a goal for the same. Then he beat Tunisia 1-0 in the quarter-finals, before losing to Senegal by three goals to one in the semi-finals of the Nations Cup.