The match between Chelsea and Brighton & Hove Albion takes place in the twentieth round of the English Premier League, where the Chelsea team hopes to continue the competition for the title of the current version of the Premier League on the evening of Wednesday, December 29, 2021, this time by hosting the stubborn Brighton & Hove Albion team on The grounds of Stamford Bridge in London, England. 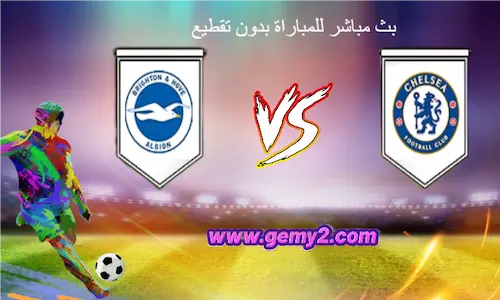 Before the expected confrontation that brings Chelsea against Brighton & Hove Albion, Chelsea is currently in third place in the Premier League table with 41 points from 19 rounds collected after winning 12 games against losing only two games, and also fell into a trap. A draw in five other matches, while Brighton & Hove Albion is currently ranked tenth in the standings with 23 points from 17 rounds, which it managed to win after winning five matches and drawing in 8 others, and was also defeated in four matches.

Chelsea has regained its balance recently, but it still needs more consistency in order not to miss the Premier League title or any other title this season, and has never known the taste of losing in the last five games he played, whether in the Premier League or the Cup The English League, on the other hand, won three matches and drew the same.