Al-Ain and Al-Wasl match today, and Al-Ain club was a wonderful guest for Al-Wasl Club at the forefront of the seventh round of the Pro League at Zabeel Stadium in Al-Wasl Club, where Al-Ain leads with 14 points and Al-Wasl occupies seventh place with 9 points. After he passed 6 rounds. Al Ain won four games in that tournament, stumbled in two games, and scored 14 goals, while the host entered the match after winning two games and stumbling in three games with a draw, scoring 7 goals and conceding 6 goals. 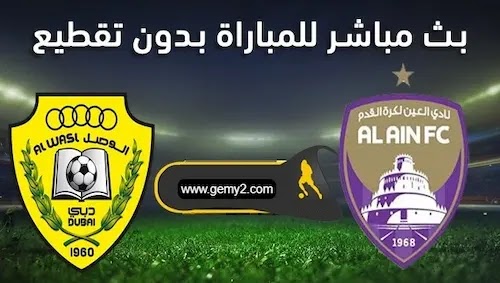 For his part, Al-Wasl realizes that the old accounts have nothing to do with this match, and is known by his coach, Oder Hellmann, for destroying Al-Ahly Youth Complex, and he hopes to repeat the same thing in front of Al-Ain, although he relied better on the harmony of his foreign players, including Uruguayan Michel Araujo, who scored In the last two matches in various competitions, striker Boetker began to feel better in the penalty area.

Fabio Lima is seeking to make up for his rather slow start, having scored one orphaned goal with Al Wasl in the league.

Al-Ain also suffers from setbacks in the previous two rounds with a draw, so today he hopes to return to the path of victory again, so the Brazilian coach Auder Hellmann, the coach of Al-Wasl, is considering taking advantage of that, and kidnapping him. From him, the championship leader match points, in the first rounds of the championship since it was stopped since September 29, and the competition stopped due to the international break.

Al-Ain and Al-Wasl match broadcast live today in Al-Ardah. The Emirati star of Al-Ain "Laba Kodjo" leads the tournament's top scorer with 9 goals, so "Al-Asfar" wants to increase his scoring ability in that match, and Al-Wasl coach "Hellman" stated: "Al-Ain is in good condition. It has an organized team Therefore, he is at the forefront of the UAE league. We defeated the young Al-Ahly in the previous round, and we want to repeat that."

The match will be held at 7:30 pm on Thursday 10-2021 Mecca time, and at 8:30 UAE time, at Al Wasl Club Stadium in the United Arab Emirates, and the match will be broadcast exclusively on the "Abu Dhabi Sports" program and the "Dubai Sports" channel with Sharjah Sports Channel.