Watch the match between Sharjah and Al Wahda live broadcast in the match that will be held at Sharjah Stadium, in the 16th round of the AFC Champions League, at exactly seven o’clock in the evening, Cairo time, the Egyptian capital.

An Emirati clash with an Asian flavor, as Sharjah and Al Wahda will look for victory and qualifying for the next round of the Asian Championship. Sharjah is playing today's meeting with high spirits after winning three ADNOC Professional League championships, as it defeated the Kalba Union with a goal without a response, before being defeated Al Dhafra 1-0, and then beat Al Wasl with three goals to two. The team will look to win the Asian summit and continue its journey in the tournament and qualify for the next round.

On the other hand, we see that Al-Wahda played modest matches during its career in the ADNOC Professional League, as it beat Al-Orouba by four without a response, before it tied with Bin Yas with a goal for the same, and then tied with Khorfakkan negatively in its third round of the championship, and it will look in today's meeting to find an achievement Winning and qualifying for the next round of the Asian Championship.

Today’s meeting will witness the presence of Al Wahda and Sharjah fans, as 60% of the stadium’s capacity was approved, and Sharjah Club announced the provision of free (PCR) tests for the team’s fans, and they will be presented at the fans’ clinic at the club’s stadium, for those who wish to attend the Asian summit, and the club explained that it was commissioned to purchase All tickets designated for Sharjah fans and gifting them to fans with the distribution of large numbers of flags and scarves bearing the team's colors and logos, and Al Wahda Club also announced that it guarantees the purchase of tickets and their distribution to the public, provided that a PCR examination is shown not exceeding 48 hours, and a certificate of vaccination against the Corona virus. 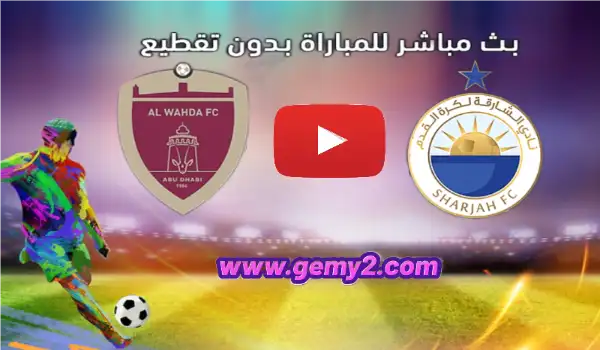