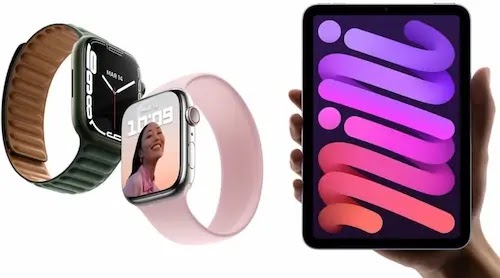 At the presentation event of the new iPhone 13, there was also time for Apple to present three new generations of its products: a new watch and two new tablets, one of which received a historic transformation.

– Apple Watch Series 7: It comes with a subtle redesign in its screen that allows it to take advantage of the curved edges and slightly increases its size on the surface of the device. This allows the screen to be 20% larger than the Series 6's screen at just 1.7mm, making visualizing texts and messages more comfortable. This screen redesign comes with consequent new wallpapers and complications that take advantage of the increased surface area, a feature that countless Apple Watch apps can take advantage of. The screen has IP6X protection from dust and scratches and the smartwatch supports a depth of 50 dives. meters. Finally, the battery recharges 33% faster and in just 45 minutes it can be recharged up to 80%. The enamel (available in aluminium, titanium or stainless steel) is available in five new colors: blue, white, black, red and green. It will go on sale in the fall and although its official price in Spain has not yet been released, Apple's presentation has announced prices starting at $399.

– New iPad: The main new is the presence of the A13 Bionic processor, which, along with the new 12-megapixel front camera and a 122-degree angle, allows the inclusion of a feature that first appeared on the last 12.9-inch iPad Pro, Center Stage Auto-framing, which in video conferencing allows users to move In front of the iPad or sharing the stage with other or other participants, the front camera reframes (horizontal and zoomed in) and adjusts the level so that it is not necessary to move the tablet. The display has True Tone adjustment and the device is compatible with the first generation of Apple Pencil. Available in space gray and space gray and in capacities of 64 or 256 GB, it will be available from September 24 with prices starting at €379.

iPad Mini: Apple's smallest tablet has undergone its latest modifications. First of all, this is the first time its layout has changed, from the usual rounded edges to flat edges in the same design as the current iPad Air and the current iPad Pro. This new design has also been carried over to the front, where for the first time the central button is dispensed with and the screen takes up as much space as possible, so in the same physical space where previous generations offered a 7.9-inch screen, there's now an 8.3-inch True Tone screen with a wide color gamut . With the disappearance of the front button, part of its functionality, as well as unlocking by biometric recognition, was transferred to the TouchID button, which, as in its older brothers, is located in the upper right part of the screen (in portrait format). Two other revolutions the iPad Mini has is the disappearance of the Lightning port in favor of the USB-C port and the ability to opt for 5G wireless connectivity. The rear camera is 12 megapixels, and the front camera is compatible with the previously mentioned Center Stage. It's also compatible with the Apple Pencil but in this case with the second generation model that includes wireless magnetic recharging capability. Available in white, space grey, purple and pink, and in 64GB and 256GB capacities, it will be available starting September 24 with prices starting at €549.