Watching the match between Zamalek and Pyramids, broadcast live in the friendly meeting that takes place at the Air Defense Stadium at exactly five o’clock in the evening, as part of the two teams’ preparations for the start of the new season, via our gemy2 website.

Zamalek is playing today's match with the aim of winning the victory before starting its African journey against the Kenyan Tusker team. During the last period, Zamalek has been engaged in a closed camp in Alexandria in order to reach the highest technical and physical form before the start of the local and African championship. 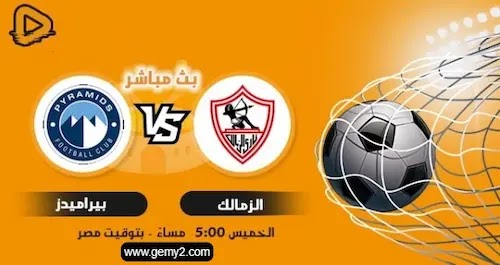 During the past few hours, Zamalek concluded heavy-caliber deals, as it contracted with Omar Kamal Abdel Wahed, Hamdi Al-Naqaz and Mahmoud Shabana, along with the return of Omar Al-Saeed, Mohamed Onajem and Mustafa Fathi, and more than one player left the team, including Mohamed Sobhi, Mahmoud Abdel Rahim Jensh, Mohamed Abdel Salam and Ahmed Eid, and Zamalek will miss In today's meeting for the services of the international hexagon, Muhammad Abu Jabal, Ahmed Abu Al-Fotouh, Mahmoud Hamdi Al-Wansh, Tariq Hamed and Mustafa Fathi, along with Ahmed Sayed Zizou.

On the other hand, Pyramids will search in today's meeting for victory and reassurance on all the players who have recently joined the team. Pyramids managed, during the past few hours, to contract with Hisham Mohamed coming from Egypt clearing, along with Hussein Al-Sayed, the former Al-Ahly star, next to Fakhr Al-Din bin Youssef, coming from Al-Ismaili.

Ihab Galal, coach of the team, will compete in today's match with striking force, especially as the team is preparing to face Azzam the Tanzanian in the Confederation Championship scheduled for next month.